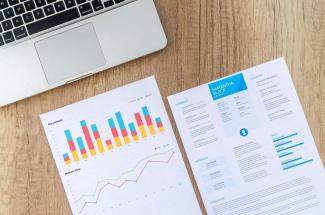 Despite a closing push, August closed on a weak note for stocks, ending a tumultuous month marked by high volatility. Investors moved away from stocks, fearing that the ongoing U.S.-China trade war would negatively impact domestic and global economies. As a result, gold prices surged and long-term bond yields plummeted as prices rose. Despite the wide market swings, consumers spent more of their income as the job market remained strong.

Stocks took a sizable hit last month, and if the ongoing trade war continues in September, investors will likely face more turmoil. The economy has weathered the storm thus far on the heels of a strong jobs market and robust consumer spending, but that could change as we enter the third quarter.

Data sources: Economic: Based on data from U.S. Bureau of Labor Statistics (unemployment, inflation); U.S. Department of Commerce (GDP, corporate profits, retail sales, housing); S&P/Case-Shiller 20-City Composite Index (home prices); Institute for Supply Management (manufacturing/services). Performance: Based on data reported in WSJ Market Data Center (indexes); U.S. Treasury (Treasury yields); U.S. Energy Information Administration/Bloomberg.com Market Data (oil spot price, WTI Cushing, OK);
www.goldprice.org http://www.goldprice.org (spot gold/silver); Oanda/FX Street (currency exchange rates). News items are based on reports from multiple commonly available international news sources (i.e. wire services) and are independently verified when necessary with secondary sources such as government agencies, corporate press releases, or trade organizations. All information is based on sources deemed reliable, but no warranty or guarantee is made as to its accuracy or completeness. Neither the information nor any opinion expressed herein constitutes a solicitation for the purchase or sale of any securities, and should not be relied on as financial advice. Past performance is no guarantee of future results. All investing involves risk, including the potential loss of principal, and there can be no guarantee that any investing strategy will be successful.