The Markets (third quarter through September 30, 2021)

Overall, the third quarter was a roller-coaster ride for the market. The Dow, the Russell 2000, the Nasdaq, and the Global Dow lost value, while the S&P 500 was able to eke out a quarterly gain. Treasury yields, the dollar, and crude oil prices ended the third quarter higher, while gold prices dipped lower. Financials, information technology, communication services, and health care ended the quarter in the black. Energy, industrials, and materials fell by at least 4.5%. Despite the downturns, the benchmark indexes remain well ahead of their 2020 closing values, led by the S&P 500, which ended the quarter nearly 15.0% over last year's pace.

July kicked off the third quarter with large caps outperforming small caps. The S&P 500, the Dow, and the Nasdaq advanced, reaching record highs along the way, while the small caps of the Russell 2000 fell over 3.5%. Treasury yields, the dollar, and crude oil prices also declined. Gold prices advanced. By the end of the month, over 80% of the S&P 500 companies that reported earnings exceeded expectations. COVID cases surged as the Delta variant spread across the country. Inflation figures continued to rise. The Consumer Price Index rose 0.9%, the Producer Price Index climbed 1.0%, both import and export prices advanced 1.0%, and retail sales increased 0.6%. The Federal Reserve noted that the economic recovery remained on track. Second-quarter gross domestic product advanced at an annualized rate of 6.5%, according to the initial estimate from the Bureau of Economic Analysis. Health care led the market sectors, followed by real estate, utilities, information technology, and communication services. Financials and energy lagged.

Equities continued their strong showing in August, recording several record highs during the month. Strong corporate earnings reports and improving economic conditions helped bolster investor confidence, despite the increasing prevalence of the Delta variant. Growth stocks outpaced value shares. Financials and communication services led the market sectors, while energy lagged. The Nasdaq paced the indexes, climbing 4.0%, followed by the S&P 500 (2.9%), the Russell 2000 (2.1%), the Global Dow (2.1%), and the Dow (1.2%). Ten-year Treasury yields jumped 7 basis points to close the month at 1.30%. The dollar rose by 0.6%, while crude oil prices fell 7.2% to $68.51 per barrel on the last business day of the month. Gold prices changed little, trading at $1,817.50 per ounce. The jobs sector improved, adding 943,000 new jobs. Wage gains were strong, while unemployment claims dipped.

Following a strong July and August, September saw the market struggle with volatility. Traders had other concerns to deal with, including slowing economic growth, elevated inflation, supply-chain disruptions, a global energy crunch, and China's regulatory restrictions. In addition, investors are facing the prospects of the Federal Reserve beginning to wind down its stimulus measures. Each of the benchmark indexes lost value, with the Nasdaq falling more than 5.0% and the S&P 500 dipping 4.8%. Among the market sectors, energy climbed 8.5%, while the remaining sectors ended well in the red. Crude oil prices rose more than 9.0% to close the month over $75.00 per barrel. The dollar and 10-year Treasury yields advanced, while gold prices declined. 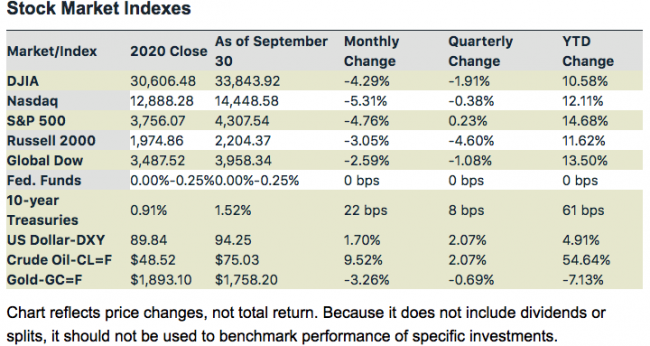 Heading into the fourth quarter of 2021, several economic indicators have improved, while a few have waned. Real estate and manufacturing slowed from the pace set earlier in the year. GDP posted strong data for the second quarter, although some estimates suggest that the third quarter will not be quite as strong. On the jobs front, there were nearly 11 million jobs available but nearly 8.7 million unemployed actively looking for work, further widening the gap between job openings and hires.