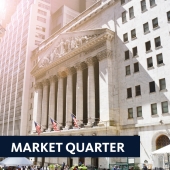 Wall Street dealt with several major issues in the first quarter of 2022. Investors had to evaluate the impact of rising inflation, higher interest rates, ongoing coronavirus concerns, and the Russia-Ukraine war. Each of the benchmark indexes listed here lost value by the end of the quarter. However, Treasury yields, the dollar, gold, and crude oil prices ended the first quarter higher. Among the market sectors, energy increased nearly 40.0%, while utilities climbed about 5.0%. The remaining sectors ended the quarter in the red, with consumer services (-12.0%) and information technology (-8.0%) losing the most.

January began the quarter with stocks reaching new all-time highs. Unfortunately, that was the high point of the month for Wall Street. The first month of the year turned out to be a pretty rough one for investors. The Russell 2000 lost 9.7%, the Nasdaq slid 9.0%, the S&P 500 dipped 5.3%, the Dow fell 3.3%, and the Global Dow slipped 0.6%. In all, January produced the worst first-month performance since 2009, and that includes a notable rally over the last two days of the month. Investors dealt with concerns over rising inflation, the prospects of higher interest rates, and the pace of global economic recovery, despite the fourth-quarter U.S. GDP advancing at an annualized rate of 6.9%, while nearly 200,000 new jobs were added. On the other hand, industrial production slowed and new orders for durable goods declined. Prices at the pump increased, closing the month at about $3.323 per gallon for regular gasoline. Ten-year Treasury yields, the dollar, and crude oil prices climbed higher, while gold prices fell.

February also opened the month on a high note, but stocks tumbled into the red by the end of the month. The S&P 500 fell to its lowest level since June 2021. Not only were investors still coping with rising inflation and interest-rate hikes, but a new crisis emerged in February — Russia's invasion of Ukraine. The United States and several other nations imposed sanctions against Russia, some of which were aimed at curtailing Russian oil and natural gas exports, which resulted in a surge in energy prices. Initially, the conflict in Ukraine shook global financial markets as stocks fell, and concerns grew that heating bills and food prices would skyrocket. By the close of the month, the Dow, the S&P 500, and the Nasdaq fell more than 3.0%. Ten-year Treasury prices initially fell on inflation worries, although yields later advanced as bond prices receded. The dollar and gold prices rose. Crude oil prices jumped more than 8.0% from the previous month, reaching $95.62 per barrel on the last day of February.

Despite attempts at peace talks, the war in Ukraine intensified in March, prompting the imposition of more economic sanctions against Russia. Inflationary pressures continued to mount, which led the Federal Reserve to raise interest rates 25 basis points with additional rate hikes anticipated. Nevertheless, stocks showed resilience. Each of the benchmark indexes posted gains from February. The S&P 500 rose 5.0%, the Nasdaq gained 4.7%, the Dow added 3.6%, the Russell 2000 climbed 2.1%, and the Global Dow increased 1.9%. Although crude oil prices were trending lower by the end of March, they were still $8.00 per barrel higher than where they began the month. The yield on 10-year Treasuries advanced nearly 50 basis points. The dollar gained 1.5%, and gold prices climbed 1.9% to $1,945.70 per ounce.

Despite accelerating inflation, the war in Ukraine, and rising interest rates, most economic indicators are still demonstrating varying degrees of strength. However, March data may begin to show some economic slowing. Gross domestic product, which ran at an annualized rate of nearly 7.0% in February, is likely to recede, while the pace of job growth may decelerate. While the Federal Open Market Committee does not meet in April, it is expected to push interest rates up by 50 basis points in May. Hopefully, a resolution to the Russia-Ukraine conflict is near.

Broadridge Investor Communication Solutions, Inc. does not provide investment, tax, legal, or retirement advice or recommendations. The information presented here is not specific to any individual's personal circumstances. To the extent that this material concerns tax matters, it is not intended or written to be used, and cannot be used, by a taxpayer for the purpose of avoiding penalties that may be imposed by law. Each taxpayer should seek independent advice from a tax professional based on his or her individual circumstances. These materials are provided for general information and educational purposes based upon publicly available information from sources believed to be reliable — we cannot assure the accuracy or completeness of these materials. The information in these materials may change at any time and without notice