For the first time since 2015, each of the benchmark indexes lost value for two consecutive quarters. They also posted losses for June, marking three consecutive down months for the tech-heavy Nasdaq, its longest losing streak since 2015. Investors watched for signs of an economic deceleration in the U.S., with inflation continuing to run at multi-decade highs, and monetary policymakers maintaining a firm stance that their priority remains bringing down prices even if it means slowing economic growth. Nevertheless, Wall Street has suffered one of its worst six-month stretches in decades. The S&P 500 is poised for its worst first half since 1962. Ten-year Treasury yields climbed from 2.37% at the beginning of the quarter to over 3.00%. The dollar is on pace for its best quarter since 2016. Consumer spending slowed for the first time this year, possibly indicating that the economy is indeed weakening. Consumer sentiment fell to its lowest level since 2021. Crude oil prices rose marginally in the quarter, spiking at $123.18 per barrel in early June, ultimately settling at around $105.00 by the end of the quarter. Gold prices declined each month of the quarter as investors weighed rising interest rates against fears of a recession. According to AAA, as of June 30, the average price for regular gasoline was $4.857 per gallon, $0.90 less than the previous week but $1.80 per gallon more than than a year ago. As prices for crude oil and gasoline increased, demand waned, helping to pull prices lower. In addition, OPEC+ agreed to increase output in July and August to compensate for the drop in production due to the sanctions placed on Russia.

Equities fell sharply in April as some disappointing earnings data from several mega-cap companies added to investor worries about rising inflation, the war in Ukraine, and the possibility of an economic pullback. The Nasdaq dropped the most since October 2008, falling nearly 24.0% from its peak as it entered bear territory. The S&P 500 notched its worst month since the beginning of the pandemic, dragged lower by heavy losses in communication services, consumer discretionary, and information technology. Bond prices also lagged as yields increased in anticipation of rising interest rates as part of the Federal Reserve's plan to quell inflation. While consumers worried about cost containment and its impact on the economy, one factor helping to drive inflation higher was strong wage growth propelled by a tight labor market. Weekly jobless claims fell to their lowest level since 1970, while the unemployment rate dropped to a pre-pandemic 3.6%. Entering May, Americans remained focused on rising inflation, the ongoing war in Ukraine, lockdowns in China due to rising COVID numbers, and the impact of the Fed's program of fiscal tightening.

May proved to be a month of market swings. Equities lost value for the first three weeks of the month. However, a late rally helped the benchmark indexes close the month relatively flat, with the exception being the tech-heavy Nasdaq, which followed April's sharp declines by falling another 2.0%. Early in the month the Federal Reserve raised interest rates 50 basis points and announced plans to start reducing its balance sheet in June. The Fed's hawkish pronouncements in its effort to curb rising inflation spurred worries of a recession, despite solid economic data from the prior month.

Stocks soured in June as a slowdown in consumer spending (personal consumption expenditures), which accounts for nearly 70% of economic activity, prompted concerns about a recession. The Federal Reserve increased the target range for the federal funds rate 75 basis points, more than expected, as forecasters estimated a 50-basis point rate increase. Despite a surge mid-month, each of the benchmark indexes ended June in the red. Crude oil prices fell in June, the first monthly decrease since November. The dollar advanced, while gold prices slid lower. 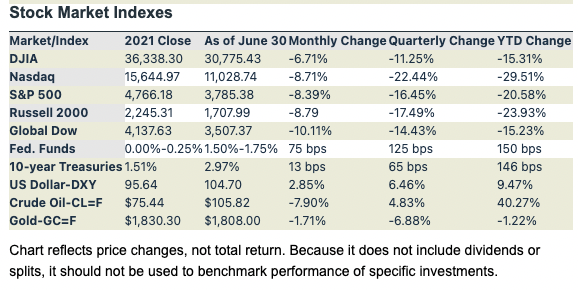 Inflation continued to run hot in June, prompting a plan of fiscal tightening from the Federal Reserve, which included a 75-basis point interest rate increase. The Fed meets again in July and is certain to increase interest rates by at least 50 basis points, with the growing likelihood of another 75-basis point jump, particularly since the Fed does not meet again until September. The first estimate of second-quarter gross domestic product is also out in July. The economy retracted 1.5% in the first quarter.