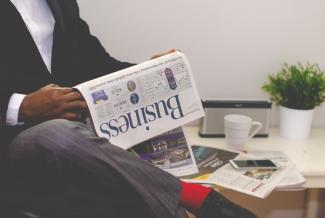 Stocks jumped to record highs last Monday after President Trump signed a pandemic relief package into law. The S&P 500, the Dow, and the Nasdaq closed the day at record highs as investors saw the stimulus relief as a boost to economic recovery. Only the small caps of the Russell 2000 failed to advance, ending the day down 0.4%. Treasury yields rose, crude oil prices fell, and the dollar was mixed. Several market sectors climbed higher, led by communication services, consumer discretionary, and information technology.
Equity indexes gave up early gains last Tuesday, ultimately closing lower. The Russell 2000 fell 1.9%, followed by the Nasdaq (-0.4%). The Dow and the S&P 500 dropped 0.2%. The Global Dow gained 0.4% on the heels of last week's trade deal between the United Kingdom and the European Union. Crude oil prices and Treasury yields advanced, while the dollar declined. Consumer discretionary and health care were the only major market sectors to post gains on the day.
Investors reacted positively to the passage of the latest round of fiscal stimulus in the hopes that it will give the economy a boost entering 2021. Each of the benchmark indexes posted gains last Wednesday, with the small caps of the Russell 2000 outperforming large caps and tech stocks. Treasury yields fell as did the dollar, while crude oil prices advanced. Among sectors, energy, industrials, financials, and materials performed the best, while communication services fell.
The last day of the month and year saw both the S&P 500 and the Dow close at record highs. Utilities, financials, real estate, and health care all gained more than 1.0% on the day. Treasury yields, crude oil prices, and the dollar closed up by the end of trading last Thursday.
The last week of December and 2020 was generally a good one for stocks. Only the small caps of the Russell 2000 failed to post a gain. The remaining benchmark indexes closed ahead, led by the S&P 500, followed by the Dow, the Global Dow, and the tech stocks of the Nasdaq. Stocks recovered in fine fashion from their COVID-impacted drop, as each of the indexes listed here closed well ahead of their 2019 year-end value, led by the Nasdaq, the Russell 2000, the S&P 500, the Global Dow, and the Dow.
Crude oil prices ended the last week of the month and year slightly higher, closing at $48.43 per barrel by Thursday afternoon, up from the prior week's price of $48.23 per barrel. The price of gold (COMEX) closed last week at $1,901.70, up from the prior week's price of $1,883.20. The national average retail price for regular gasoline was $2.243 per gallon on December 28, $0.019 higher than the prior week's price but $0.328 less than a year ago.

Eye on the Week Ahead

The employment figures for December are out this week. There were 245,000 new jobs added in November, well below the October and September totals. Also out this week are the December purchasing managers' surveys for manufacturing and services. Growth slowed in both manufacturing and services sectors in November.
Data sources: Economic: Based on data from U.S. Bureau of Labor Statistics (unemployment, inflation); U.S. Department of Commerce (GDP, corporate profits, retail sales, housing); S&P/Case-Shiller 20-City Composite Index (home prices); Institute for Supply Management (manufacturing/services). Performance: Based on data reported in WSJ Market Data Center (indexes); U.S. Treasury (Treasury yields); U.S. Energy Information Administration/Bloomberg.com Market Data (oil spot price, WTI, Cushing, OK); www.goldprice.org (spot gold/silver); Oanda/FX Street (currency exchange rates). News items are based on reports from multiple commonly available international news sources (i.e., wire services) and are independently verified when necessary with secondary sources such as government agencies, corporate press releases, or trade organizations. All information is based on sources deemed reliable, but no warranty or guarantee is made as to its accuracy or completeness. Neither the information nor any opinion expressed herein constitutes a solicitation for the purchase or sale of any securities, and should not be relied on as financial advice. Past performance is no guarantee of future results. All investing involves risk, including the potential loss of principal, and there can be no guarantee that any investing strategy will be successful.
The Dow Jones Industrial Average (DJIA) is a price-weighted index composed of 30 widely traded blue-chip U.S. common stocks. The S&P 500 is a market-cap weighted index composed of the common stocks of 500 largest, publicly traded companies in leading industries of the U.S. economy. The NASDAQ Composite Index is a market-value weighted index of all common stocks listed on the NASDAQ stock exchange. The Russell 2000 is a market-cap weighted index composed of 2,000 U.S. small-cap common stocks. The Global Dow is an equally weighted index of 150 widely traded blue-chip common stocks worldwide. The U.S. Dollar Index is a geometrically weighted index of the value of the U.S. dollar relative to six foreign currencies. Market indices listed are unmanaged and are not available for direct investment.
© 2021 The Retirement Financial Center All rights reserved.