October proved to be one of the best months for equities in 2021, with each of the benchmark indexes listed here enjoying solid gains. The S&P 500 had its best month since November 2020. The Nasdaq picked up over 7.25%, the largest monthly advance in more than a year. Strong third-quarter corporate earnings data helped ease investor concerns that rising inflation, supply-chain bottlenecks, labor shortages, and rising coronavirus cases would hamper corporate America. Year to date, each of the indexes is well over 16.00% higher than its respective 2020 closing value, with the S&P 500 and the Nasdaq more than 20.00% higher.

Wall Street's strong October performance came despite a notable slowdown in economic growth as third-quarter GDP rose 2.0%, following a 6.7% increase in the second quarter. Job growth slowed, although the number of unemployment claims also decreased. Inflationary pressures appear to be more than transitory as the latest Consumer Price Index showed prices rose 0.4%, while producer prices increased 0.5%. The housing sector enjoyed solid gains as sales of both new and existing homes rose. Each of the market sectors advanced, with energy (16.9%) and consumer discretionary (9.3%) leading the way.

Ten-year Treasury yields inched higher in October, the dollar dipped lower, gold prices increased nearly 1.50%, and crude oil prices rose more than 10.00% to $83.27 per barrel. The national average retail price for regular gasoline was $3.383 per gallon on October 25, up from the September 27 price of $3.175 per gallon. 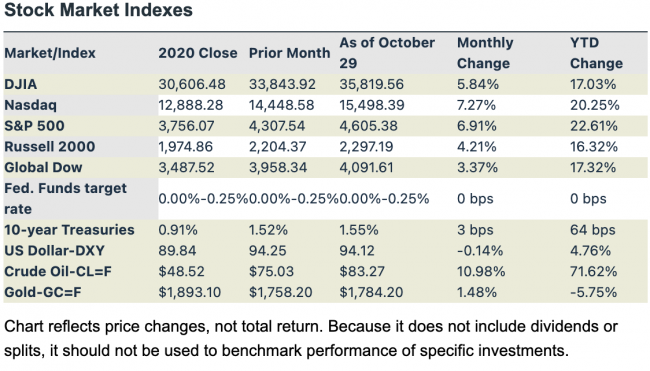 Job growth has slowed somewhat, while inflation has continued to rise. The Federal Reserve has hinted that it will begin scaling back asset purchases as early as November. With inflationary pressures mounting, it is possible that an upward adjustment to the federal funds rate may occur sooner rather than later. In addition, there may be follow-up items from the G-20 meeting held on October 30 in Rome. Items on the agenda included high energy prices, supply chain problems, and a global minimum tax rate. In addition, Congress is likely to continue working to reach a deal on a $1.75 trillion economic and environmental bill in November.