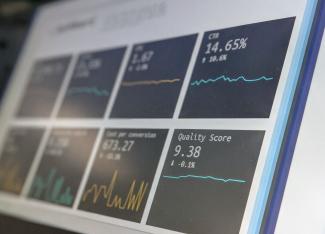 Stocks fell for the second consecutive month in October as rising COVID-19 cases and related deaths shunted signs of an economic rebound. The month began on an upswing with both the Nasdaq and S&P 500 posting their best weekly gains since July, and the Dow finally pushed ahead of its 2019 year-end value.
Unfortunately, reported virus cases began to soar by mid-month, both here and in Europe. Word that Great Britain may impose stricter lockdowns hit stocks there and eventually in the United States.
Nevertheless, there are signs that the economy is gradually picking up steam. Gross domestic product rebounded in the third quarter and job growth continued in September, albeit far below its August pace. Several companies reported strong earnings in the third quarter.
Personal income inched ahead by 0.9% and consumer spending rose 1.0%. Inflation remained well below the Federal Reserve's target of 2.0%, keeping prices for consumer goods and services down. Interest rates for loans and mortgages remain low, helping the housing sector to surge.
Another reason for investor trepidation was the ongoing debate over whether and when another round of fiscal stimulus would be in the offing. Throughout the month, there were indications that some aid would be forthcoming before the November election. However, that does not appear to be in the cards.
By the end of the month, only the small caps of the Russell 2000 were able to forge ahead in value. The remaining indexes suffered monthly losses, led by the Dow, followed by the S&P 500, the Nasdaq, and the Global Dow.
Year to date, the Nasdaq is 21.6% ahead of last year's pace, followed by the S&P 500, which is up 1.2%. The remaining indexes are at least 7.0% off their respective 2019 closing values.
By the close of trading on October 30, the price of crude oil (CL=F) was $35.61 per barrel, well below its September 30 price of $39.64 per barrel. The national average retail regular gasoline price was $2.143 on October 26, $0.026 lower than the September 28 selling price and $0.453 less than a year ago. The price of gold remained steady through the month, closing at $1,878.00 on October 30, down slightly from its September 30 closing price of $1,891.80.

November is sure to bring with it plenty of developments, particularly in light of the presidential election. Economic growth has been mixed, with some indicators, such as housing and industrial production, picking up steam, while others, like consumer prices and employment, have been slower to respond. The economy should continue to grow this month, but how the election impacts that growth remains to be seen.
Data sources: Economic: Based on data from U.S. Bureau of Labor Statistics (unemployment, inflation); U.S. Department of Commerce (GDP, corporate profits, retail sales, housing); S&P/Case-Shiller 20-City Composite Index (home prices); Institute for Supply Management (manufacturing/services). Performance: Based on data reported in WSJ Market Data Center (indexes); U.S. Treasury (Treasury yields); U.S. Energy Information Administration/Bloomberg.com Market Data (oil spot price, WTI, Cushing, OK); www.goldprice.org (spot gold/silver); Oanda/FX Street (currency exchange rates). News items are based on reports from multiple commonly available international news sources (i.e. wire services) and are independently verified when necessary with secondary sources such as government agencies, corporate press releases, or trade organizations. All information is based on sources deemed reliable, but no warranty or guarantee is made as to its accuracy or completeness. Neither the information nor any opinion expressed herein constitutes a solicitation for the purchase or sale of any securities, and should not be relied on as financial advice. Past performance is no guarantee of future results. All investing involves risk, including the potential loss of principal, and there can be no guarantee that any investing strategy will be successful.
The Dow Jones Industrial Average (DJIA) is a price-weighted index composed of 30 widely traded blue-chip U.S. common stocks. The S&P 500 is a market-cap weighted index composed of the common stocks of 500 largest, publicly traded companies in leading industries of the U.S. economy. The NASDAQ Composite Index is a market-value weighted index of all common stocks listed on the NASDAQ stock exchange. The Russell 2000 is a market-cap weighted index composed of 2,000 U.S. small-cap common stocks. The Global Dow is an equally weighted index of 150 widely traded blue-chip common stocks worldwide. The U.S. Dollar Index is a geometrically weighted index of the value of the U.S. dollar relative to six foreign currencies. Market indices listed are unmanaged and are not available for direct investment.
© 2022 The Retirement Financial Center All rights reserved.