Despite some positive economic news, global and domestic markets were sent reeling in November following reports of a new coronavirus strain. The Omicron variant, first discovered in South Africa, prompted several countries, including the United States, to impose travel restrictions. Federal Reserve Chair Jerome Powell indicated that the coronavirus variant could hinder economic recovery efforts and impact the country's response to surging inflation. Nevertheless, Powell also suggested that the central bank could end its asset purchase program a few months sooner than planned, apparently signaling confidence in the economic recovery, despite concerns over the Omicron variant. Inflation continued to rise, as supply-chain bottlenecks and labor shortages prompted price hikes at both the manufacturing and retail levels.

The Omicron variant also impacted crude oil prices, driving them to the biggest monthly loss since early 2020. Prior to news of the variant, several countries, including the United States, responded to rising oil prices by planning to release of several million barrels of oil from strategic reserves. Bond prices rose in anticipation of rising interest rates, sending yields lower, with 10-year Treasury yields falling 11 basis points to close the month at 1.44%.

There were some positive economic signs in November. Industrial production rose, while sales of new and existing homes increased. More than 500,000 new jobs were added, and weekly claims for unemployment insurance fell to their lowest level since 1969.

November saw the dollar climb higher, while gold prices dropped nearly 1.0%. Prices at the pump increased, as the national average retail price for regular gasoline was $3.395 per gallon on November 22, up from the October 25 price of $3.383 per gallon. 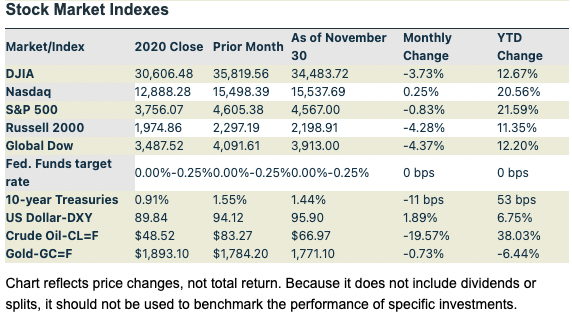 December will not only close 2021 but will likely be a precursor to what lies ahead in 2022. The Federal Open Market Committee meets mid-month and is expected to address rising inflationary pressures. The FOMC could accelerate the reduction of bond purchases and possibly consider raising interest rates sometime in 2022. Job growth accelerated in September and October, adding nearly 850,000 new jobs. November's figure is projected to be in the range of 350,000 new jobs added. Industrial production is expected to expand in November despite being hampered by supply bottlenecks and labor shortages.