Stocks were volatile in May, likely a reflection of strength in the U.S. economy as well as concerns about inflation and the timing of when the Federal Reserve might begin to taper its accommodative policies. Regarding inflation, members of the Federal Open Market Committee acknowledged that prices may run higher than the 2.0% target set by the Committee due to transitory supply-chain bottlenecks, which are expected to fade.

Stocks retreated mid-month as inflation indicators pointed to price growth, while cryptocurrency volatility added to investor uncertainty. Nevertheless, stocks rebounded during the last week of May to pull the major market indexes higher, with only the Nasdaq failing to outperform its April value. Otherwise, the Global Dow led the benchmarks for the month, followed by the Dow, the S&P 500, and the Russell 2000. Year to date, the Global Dow is up nearly 17.0%, followed by the Russell 2000, the Dow, the S&P 500, and the Nasdaq. 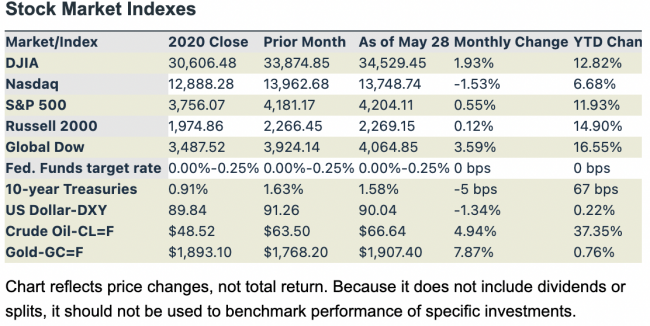 The easing of COVID-related restrictions in June should encourage for more travel. Labor should see more new jobs added, while unemployment claims are expected to decrease. Overall, economic activity is expected to pick up. However, rising inflation will remain in a concern, especially based on April's Consumer Price Index and Personal Income and Outlays report.

Data sources: Economic: Based on data from U.S. Bureau of Labor Statistics (unemployment, inflation); U.S. Department of Commerce (GDP, corporate profits, retail sales, housing); S&P/Case-Shiller 20-City Composite Index (home prices); Institute for Supply Management (manufacturing/services). Performance: Based on data reported in WSJ Market Data Center (indexes); U.S. Treasury (Treasury yields); U.S. Energy Information Administration/Bloomberg.com Market Data (oil spot price, WTI Cushing, OK); www.goldprice.org (spot gold/silver); Oanda/FX Street (currency exchange rates). News items are based on reports from multiple commonly available international news sources (i.e. wire services) and are independently verified when necessary with secondary sources such as government agencies, corporate press releases, or trade organizations. All information is based on sources deemed reliable, but no warranty or guarantee is made as to its accuracy or completeness. Neither the information nor any opinion expressed herein constitutes a solicitation for the purchase or sale of any securities, and should not be relied on as financial advice. Forecasts are based on current conditions, subject to change, and may not come to pass. U.S. Treasury securities are guaranteed by the federal government as to the timely payment of principal and interest. The principal value of Treasury securities and other bonds fluctuate with market conditions. Bonds are subject to inflation, interest-rate, and credit risks. As interest rates rise, bond prices typically fall. A bond sold or redeemed prior to maturity may be subject to loss. Past performance is no guarantee of future results. All investing involves risk, including the potential loss of principal, and there can be no guarantee that any investing strategy will be successful.