Wall Street opened the month on a high note, with each of the benchmark indexes advancing. A stronger-than-expected jobs report and solid fourth-quarter corporate earnings data helped support equities. Nevertheless, concerns about the Russia-Ukraine situation began to worry investors. Natural gas and crude oil prices climbed higher. Throughout much of February, the impending crisis in Eastern Europe seemed to displace thoughts about a likely interest-rate hike from the Federal Reserve in March.

As fighting continued throughout the last days of February, Western countries announced additional sanctions against Russia. Even Switzerland broke from its customary neutral stance to join the European Union in its actions. The United States, United Kingdom, Canada, and European Union blocked several major Russian banks from participating in the SWIFT payment system.

Global stocks took the brunt of the turmoil. Domestically, the benchmark indexes seemed to respond more to a rise in inflationary pressures than the conflict in Eastern Europe. Nevertheless, for the second consecutive month, each of the benchmark indexes listed here fell, led by the Dow, followed by the Nasdaq, the S&P 500, and the Global Dow. The small caps of the Russell 2000 were able to post a gain.

Ten-year Treasury yields bounced up and down throughout the month, finally settling at 1.83%. Domestically, crude oil prices advanced, but not at the pace of Brent crude, which rose to $100.99 per barrel. Prices at the pump rose in February as the national average retail price for regular gasoline was $3.530 per gallon on February 21, up from the January 24 price of $3.323 per gallon. Gold prices increased notably, hitting a one-year high after rising to nearly $1,900.00 per ounce. 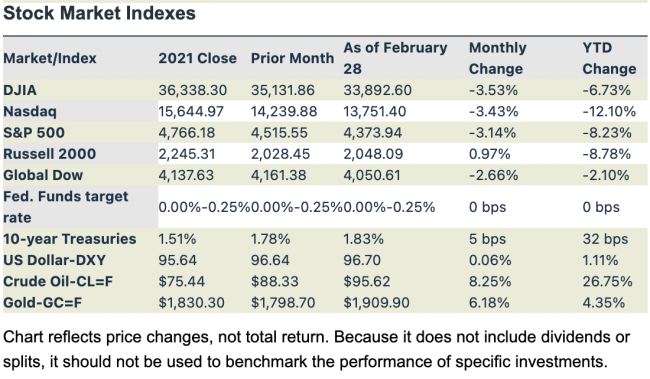 The Federal Open Market Committee meets in March for the first time since January. It is expected that the Committee with raise the federal funds target rate by at least 25 basis points — the first such increase since December 2018. A bump in interest rates, coupled with the Russia-Ukraine conflict, is likely to impact economic and market growth, but to what extent and for how long is difficult to project.