All of this led to April being a rather difficult month for Wall Street, capping the worst four-month start to a year in decades. The Dow and the S&P 500 endured the worst monthly returns since March 2020, but they weren't as bad as the Nasdaq, which suffered its biggest drop since October 2008, according to Dow Jones Market Data.

Ten-year Treasury yields climbed 56 basis points to settle at 2.88%. Crude oil prices advanced $3.13 to $104.07 per barrel. Prices at the pump fell in April as the national average retail price for regular gasoline was $4.107 per gallon on April 25, up from the March 28 price of $4.334 per gallon. Gold prices decreased after climbing well above $1,900.00 per ounce in March. The U.S. dollar hit a 20-year high before pulling back, but still posted the best month since January 2015. 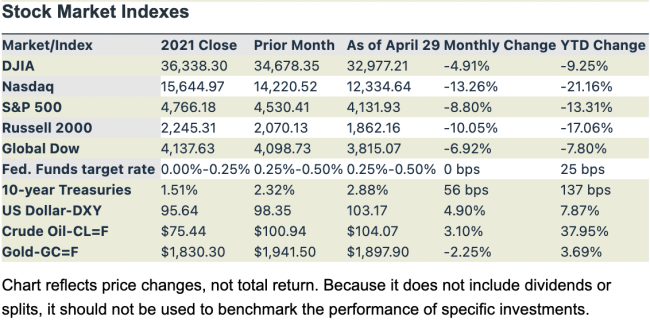 The Federal Open Market Committee meets in May for the first time since March. It is expected that the Committee will follow its most recent 25-basis point rate increase with a rate hike of at least 50 basis points. Many analysts expect the economy and stock market to be impacted by the ongoing Russia-Ukraine conflict and the restrictive monetary policy adopted by the Federal Reserve as it attempts to slow rising inflation.