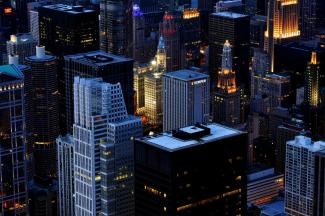 April began on a sour note for stocks as each of the indexes listed here lost value. Economic reports reflected the negative impact of the COVID-19 pandemic. There were more than 700,000 jobs lost in March while total claims for unemployment insurance benefits soared to nearly 18 million. A cut in production didn't prevent crude oil prices from hitting negative numbers as demand waned and storage neared full capacity. Purchasing managers saw manufacturing hit lows not seen in more than ten years.
The federal government continued to try easing the economic strain on individuals and businesses. The Paycheck Protection Program and Health Care Enhancement Act replenished the Paycheck Protection Program, provided funding for additional small business loans, offered financial support to hospitals, and increased the availability for more virus testing. The Federal Reserve added trillions of dollars in funds to its lending programs for states, cities, and midsize businesses. But the economic strain prompted a few states to begin the process of easing lockdown restrictions and reopening a range of businesses, in lieu of stay-at-home restrictions.
Despite several periods of volatility, stocks enjoyed their best month since 1987. A spike during the week leading up to Easter pushed stocks ahead to stay for the month. Of the benchmark indexes listed here, only the Global Dow did not reach double-digit gains for the month. The Nasdaq climbed more than 15.0% and is less than 1.0% from its year-end value. The large caps of both the Dow (11.08%) and the S&P 500 (12.68%) posted solid gains as did the small caps of the Russell 2000, which jumped nearly 14.0%. While stock values rose in April, bond yields fell as prices climbed. The yield on 10-year Treasuries dropped 7 basis points from March and is close to 130 basis points below its 2019 value.
By the close of trading on April 30, the price of crude oil (CL=F) sank to $19.04 per barrel, well below the March 31 price of $20.35 per barrel. Reeling oil values sent prices at the pump spiraling downward. The national average retail regular gasoline price was $1.773 per gallon on April 27, down from the March 30 selling price of $2.005 and $1.114 less than a year ago. The price of gold rose by the end of April, climbing to $1,691.00 by close of business on the 30th, up from its $1,591.20 price at the end of March.

While April was a solid month for stocks, the economy has slowed dramatically. As more data is revealed, the news on the economic front is expected to continue to show the negative impact of COVID-19. Jobs, manufacturing, and government spending are sectors expected to be hit hardest.
Data sources: Economic: Based on data from U.S. Bureau of Labor Statistics (unemployment, inflation); U.S. Department of Commerce (GDP, corporate profits, retail sales, housing); S&P/Case-Shiller 20-City Composite Index (home prices); Institute for Supply Management (manufacturing/services). Performance: Based on data reported in WSJ Market Data Center (indexes); U.S. Treasury (Treasury yields); U.S. Energy Information Administration/Bloomberg.com Market Data (oil spot price, WTI Cushing, OK); www.goldprice.org (spot gold/silver); Oanda/FX Street (currency exchange rates). News items are based on reports from multiple commonly available international news sources (i.e. wire services) and are independently verified when necessary with secondary sources such as government agencies, corporate press releases, or trade organizations. All information is based on sources deemed reliable, but no warranty or guarantee is made as to its accuracy or completeness. Neither the information nor any opinion expressed herein constitutes a solicitation for the purchase or sale of any securities, and should not be relied on as financial advice. Past performance is no guarantee of future results. All investing involves risk, including the potential loss of principal, and there can be no guarantee that any investing strategy will be successful.
The Dow Jones Industrial Average (DJIA) is a price-weighted index composed of 30 widely traded blue-chip U.S. common stocks. The S&P 500 is a market-cap weighted index composed of the common stocks of 500 leading companies in leading industries of the U.S. economy. The NASDAQ Composite Index is a market-value weighted index of all common stocks listed on the NASDAQ stock exchange. The Russell 2000 is a market-cap weighted index composed of 2,000 U.S. small-cap common stocks. The Global Dow is an equally weighted index of 150 widely traded blue-chip common stocks worldwide. The U.S. Dollar Index is a geometrically weighted index of the value of the U.S. dollar relative to six foreign currencies. Market indices listed are unmanaged and are not available for direct investment.
© 2022 The Retirement Financial Center All rights reserved.