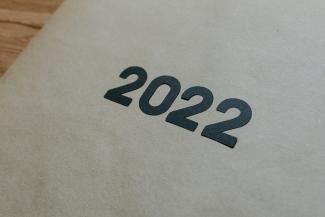 The year 2022 may best be described by one word: inflation. The economies of the United States and the world were influenced by rising inflation, its causes, and the policies aimed at curtailing it. While inflationary pressures began to mount in 2021, they were exacerbated by continuing supply shortages; the ongoing effects of the COVID-19 pandemic, both here and abroad; the Russian invasion of Ukraine; and a global energy crisis.

Early in 2022, the Federal Reserve expected inflation to reach 2.6% by the end of the year, not much above their 2.0% target. Federal officials expected supply bottlenecks to ease, economies to re-open after relaxing COVID-related restrictions, and economic activity to return to something close to normal.

Unfortunately, the Fed underestimated how rising wages, federal aid, and expanded savings would lead to increased consumer spending, which continued to outpace supply, and drive prices higher. Most importantly, Fed officials didn't foresee the impact the Russian invasion of Ukraine would have on world trade in energy, food commodities, and resources such as natural gas and crude oil. And inflation was not just felt in the U.S. but throughout world economies as well. The International Monetary Fund expects worldwide inflation to hit 8.8%, the highest rate since 1996. In response, the Federal Reserve began the most aggressive policy of interest-rate hikes in more than 15 years.

Consumer price indexes in the 19 countries that use the euro currency rose to 10.0% or higher in November from a year earlier, while prices for food rose at a faster pace. Inflationary pressures also impacted world economies in the Middle East, Africa, South America, Canada, and Mexico. Rising inflation made countries' imports more expensive and forced central banks to raise interest rates. The U.S. dollar surged in value against most world currencies, weakening foreign currencies and contributing to rising prices for goods and services.
While overall inflationary pressures may have peaked as we close out 2022, food and energy prices remain elevated. Energy prices led the price surge at the beginning of the year. Crude oil prices rose to more than $110.00 per barrel for the first time since 2011. Energy prices, which were already rising at the end of 2021, were sent soaring following the Russian invasion of Ukraine as Russian refining capacity diminished amidst sanctions and trade restrictions imposed by several countries.

However, energy prices have since stabilized somewhat. Helping to stem surging oil prices was a notable retreat in Chinese energy demand amidst COVID-related restrictions; the stabilization of Russian crude output; increased U.S. oil production; and a release of oil from the Strategic Petroleum Reserve.

The U.S. economy saw a slowdown in growth for much of 2022. Gross domestic product contracted in the first two quarters of the year after advancing at an annualized rate of 5.9% in 2021. But GDP rebounded in the third quarter, climbing 3.2%. Although inflation has cut into consumers' purchasing power, they have continued to spend during difficult economic times, supported by rising wages, job growth, and access to savings accumulated during the pandemic.

Industrial production lagged through the summer months, only to rebound during the latter part of 2022, ultimately exceeding its pace from a year earlier. The housing sector was hit particularly hard by rising mortgage rates and diminished inventory. Existing home sales were more than 35.0% below their pace in 2021, while sales of new single-family homes lagged by more than 15.0%.
Inflation also impacted the stock market, both at home and abroad. Several market sectors that had led the bull surge since 2008 suffered notable pullbacks. Information technology and communication services ended up as two of the worst performing sectors in 2022. Retail stocks also took a tumble as inflation drove up nondiscretionary items like food and energy, leaving less for consumers to spend on discretionary products and services. Also plaguing retailers were rising costs associated with products, services, and labor.

This past year was not only a difficult one for stocks and bonds, but also for "alternative assets" such as crypto. Rising interest rates impacted the viability of crypto. Couple this with revelations of fraud and abuse, and crypto assets have fallen precipitously.

Nevertheless, as 2022 draws to a close, there are some positives to consider entering the new year. The GDP expanded for the first time in the third quarter, and crude oil and gas prices reversed course and dipped lower. Primary inflationary indicators, such as the consumer price index and the personal consumption expenditures price index, trended lower at the end of the year. Ultimately, the economic outlook for 2023 will likely depend on the path of inflation and whether the economies of the U.S. and the world can avoid a recession as prices are driven lower. 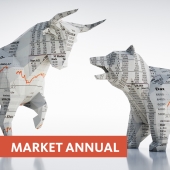 Eye on the Year Ahead

The battle against rising inflation will likely continue to dominate much of the economy and stock market in 2023. If and when the Federal Reserve scales back its aggressive interest-rate hikes, investors might be more inclined to return to equities, particularly tech shares. However, the war in Ukraine and new COVID cases will also have an impact. If nothing else, 2023 should be very interesting.