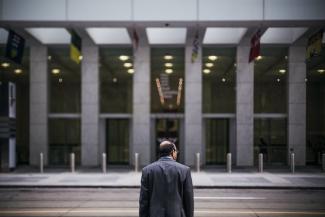 Over the past 12 months, we have endured a global pandemic resulting in numerous deaths and hospitalizations, mass layoffs, a sinking economy, and a contentious presidential election. Our lives and lifestyles changed, where working and learning from home became the "new normal," and in-person communication was replaced by virtual meetings. In short, 2020 was a very memorable year that tested our resolve, patience, and courage.
The year began with news of a SARS-like virus spreading in China. Little did we know the impact this contagion would impart on our health, politics, and economy. Late in January, the very first known case of COVID-19 in the United States involved a Washington state victim who had traveled from the city of Wuhan, China. By February, the growing number of reported cases of the virus prompted travel restrictions, stay-at-home orders, and shutting down of businesses both domestically and around the world. Aside from concern caused by the virus, we were consumed by the impeachment in February of President Trump, who was eventually acquitted by the Senate.
In March, the World Health Organization declared a global pandemic as the spread of the virus reached more than 100 countries, with more than 100,000 reported cases. By mid-March, President Trump declared a state of national emergency. World economies and stock markets were rocked by the spread of the COVID-19 virus. leading to major market sell-offs, plunging stocks well below their 2019 values. The U.S. first-quarter gross domestic product decelerated at a rate of -5%, only to be outdone by a second-quarter deceleration of -31.4%. Fear became the motivating factor in our lives — fear of contracting the virus, fear of losing a loved one to the virus, fear of job loss, fear of economic failure, and fear of losing our money.
In response to the economic turmoil caused by the pandemic, several pieces of legislation were passed, including the Coronavirus Preparedness and Response Supplemental Appropriations Act, the Families First Coronavirus Response Act, and the massive COVID-19 rescue package, the Coronavirus Aid, Relief, and Economic Security Act (CARES Act), which included the Paycheck Protection Program and distribution of stimulus checks to qualifying individuals. In May, focus shifted to the death of George Floyd, which sparked protests and confrontations across the country.
The summer months saw a slight lull in the number of reported virus cases. Economies began to marginally recover, some businesses began to reopen, and travel restrictions were relaxed. However, as the availability of testing for the virus increased, so did the number of reported cases. Following the Democratic and Republican national conventions, the campaign for the presidential election captured the focus of most Americans for the rest of the year, although COVID-19 seemed to cast a shadow over almost every aspect of our lives.
The November presidential election resulted in the defeat of President Donald Trump by former Vice President Joe Biden, with the post-election period dominated by attempts to overturn the results through federal courts and state legislatures. Nevertheless, some positive news came at the end of the year with the development and initial dissemination of COVID-19 vaccines and additional legislation that provided $900 billion in pandemic-related stimulus.
The new year brings with it a sense of hope: hope that the virus will be controlled; hope for a return to some form of normalcy in our daily lives; hope for economic prosperity and job security; and hope for peace, both here and around the world — and a good riddance to 2020.
Chart reflects price changes, not total return. Because it does not include dividends or splits, it should not be used to benchmark performance of specific investments.

Eye on the Year Ahead

The year 2021 should bring continued economic recovery. As the United States and the world inch slowly toward normalcy following the battle against the COVID-19 pandemic, stock markets, employment, and production should also advance.
Data sources: Economic: Based on data from U.S. Bureau of Labor Statistics (unemployment, inflation); U.S. Department of Commerce (GDP, corporate profits, retail sales, housing); S&P/Case-Shiller 20-City Composite Index (home prices); Institute for Supply Management (manufacturing/services). Performance: Based on data reported in WSJ Market Data Center (indexes); U.S. Treasury (Treasury yields); U.S. Energy Information Administration/Bloomberg.com Market Data (oil spot price, WTI Cushing, OK); www.goldprice.org (spot gold/silver); Oanda/FX Street (currency exchange rates). News items are based on reports from multiple commonly available international news sources (i.e. wire services) and are independently verified when necessary with secondary sources such as government agencies, corporate press releases, or trade organizations. All information is based on sources deemed reliable, but no warranty or guarantee is made as to its accuracy or completeness. Neither the information nor any opinion expressed herein constitutes a solicitation for the purchase or sale of any securities, and should not be relied on as financial advice. Past performance is no guarantee of future results. All investing involves risk, including the potential loss of principal, and there can be no guarantee that any investing strategy will be successful.
The Dow Jones Industrial Average (DJIA) is a price-weighted index composed of 30 widely traded blue-chip U.S. common stocks. The S&P 500 is a market-cap weighted index composed of the common stocks of 500 leading companies in leading industries of the U.S. economy. The NASDAQ Composite Index is a market-value weighted index of all common stocks listed on the NASDAQ stock exchange. The Russell 2000 is a market-cap weighted index composed of 2,000 U.S. small-cap common stocks. The Global Dow is an equally weighted index of 150 widely traded blue-chip common stocks worldwide. The U.S. Dollar Index is a geometrically weighted index of the value of the U.S. dollar relative to six foreign currencies. Market indices listed are unmanaged and are not available for direct investment.
© 2022 The Retirement Financial Center All rights reserved.